Rugby seems to have developed a rash of Tory banners – expensive looking durable ones – put up on road junctions and the like. But should they be there?

Nearest to me is the one on the gates to the old Rugby College site: 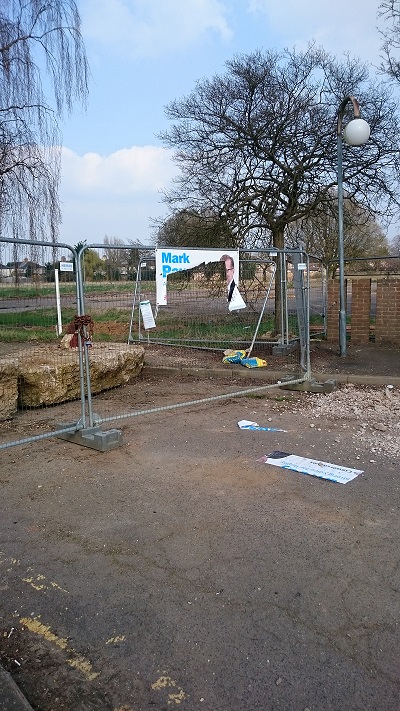 As can be seen, someone has vandalised it and the scraps are still there. EDIT 9/4 – Warwickshire College inform me that the land was sold to Bellway Homes East Midlands in November (not sure why the for sale boards are still there nearly 6 months later).

So did the Tories get permission or did they just slap it up there? EDIT 9/4 – I have since asked Bellway Homes if they have given permission

Another one I spotted is in a brilliant place: 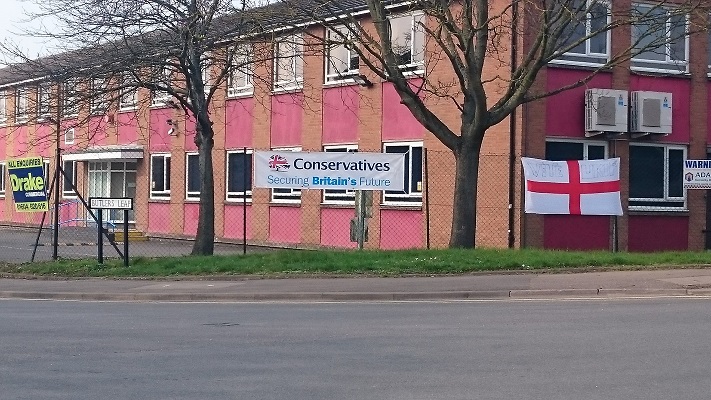 You can just make out on the right that someone far less official has put up a St George’s flag and scrawled “Vote UKIP” on it, presumably in response.

What is fantastic about the site is that it is on the corner where Rapak used to be. The place was shut down last year after the owners moved the work to Bulgaria. Kind of puts an ironic spin on “Securing Britain’s Future” to advertise at a closed business.

Drakes, the agents acting for the owners of the Rapak site have told me they are not aware of any permissions to use it for political advertising.

One Response to “Tories flyposting? And stupidly!”